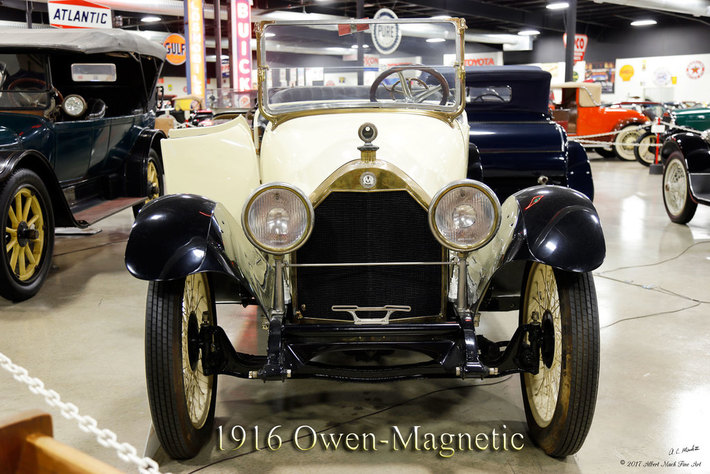 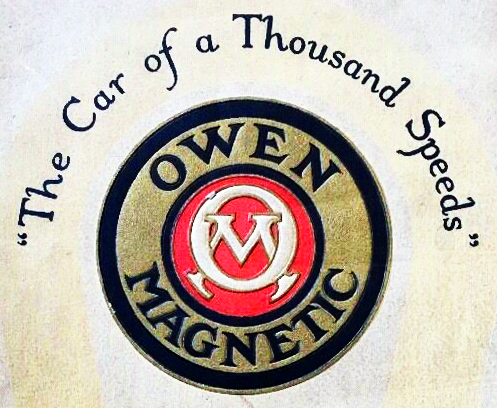 The Owen Magnetic was a pioneering American brand of hybrid electric luxury automobiles manufactured between 1915 and 1922. Car models of the brand were notable for their use of an electromagnetic transmission and were early examples of an electric series hybrid drive train. The manufacture of the car was sponsored by R.M. Owen & Company of New York, New York. The car was built in New York City in 1915, in Cleveland, Ohio, between 1916 and 1919 and finally in Wilkes-Barre, Pennsylvania, in 1920 and 1921.

While the cars were powered by a six-cylinder engine, power for the wheels was based upon the same electromagnetic principle that propelled the Battleship U.S.S. New Mexico.

The drive mechanism had no direct connection between the engine and the rear wheels. Instead of a flywheel, a generator and a horseshoe shaped magnet were attached to the rear of the engine's crank shaft. On the forward end of the car's drive shaft, was an electric motor with an armature fitted into an air space inside the whirling magnet. Electric current, transmitted by the engine's generator and magnet attached to the armature of the electrical motor, providing the energy to turn the drive shaft and propel the engine's rear wheels. Speed for the car was controlled by a small lever adjacent to the steering wheel.

The first Owen Magnetic was introduced at the 1915 New York auto show when Justus B. Entz's electric transmission was fitted to the Owen automobile: "R.M. Owen have leased the large new three story fireproof building at the corner of Fifth avenue and One Hundred and Forty-second street, New York, where they will build the new Owen Magnetic motor cars." Walter C. Baker, of Cleveland, Ohio, owned the patents on the Entz transmission, thus each of the 250 Owen Magnetic automobiles produced in New York was built under license. The former Owen plant still exists and is presently a self-storage facility.

The car became as famous as the company's clientele, which included Enrico Caruso and John McCormack. Owen Magnetics were advertised as "The Car of a Thousand Speeds".

In December 1915, the concern was moved to Cleveland when the R.M. Owen Company joined Walter Baker (of Baker Motor Vehicle) and the Rauch and Lang concern. The Baker Electric Car company would produce the car, and Rauch and Lang would build the coachwork. Because of the combined resources, the 1916 Owen Magnetic increased its model range for 1916 model year, with prices in the $3,000 to $6,000 dollar range. Production continued through 1918, when Baker shifted its focus to war goods manufacturing.

The company reorganized as the Owen Magnetic Motor Car Corporation based in Wilkes-Barre. The newly equipped factory was situated in the old Matheson works at Forty Fort, Pennsylvania. The Wilkes-Barre Times announced the resumption of production for January 1, 1920, with the aim of producing 750 cars that year. The company received an order for 500 vehicles from Crown Limited of Great Britain. Under the terms of the agreement, the cars were named Crown Magnetic. However, by August 1920, before the order could be fulfilled, Owen Magnetic was in receivership.

The Crown Magnetic was displayed at the London Motor Show in 1920.

According to some sources, the Woods Dual Power car manufactured by the Woods Motor Vehicle Company in Chicago also used the Entz transmission. That is not true. The Woods Dual Power had a drivetrain based on Roland Fend's U.S. patent number 1,303,870, not the inventions of Justus Entz. The Entz transmission had no physical connection between the gasoline engine and the driveshaft, while the Woods Dual Power had a clutch between the gas engine and the electric motor, allowing the engine to also drive the car through the armature shaft of the motor, which itself was connected to the driveshaft. The Woods car was similar in many ways to today’s hybrids. It used both a gasoline engine and an electric motor to propel the wheels, had regenerative braking to recharge the batteries and in some circumstances the car could charge the batteries while running on gasoline.

This auto can be seen at The Tupelo Auto Museum

The auction will be held at the Tupelo Automobile Museum with the preview day April 25 and the auction April 26-27.