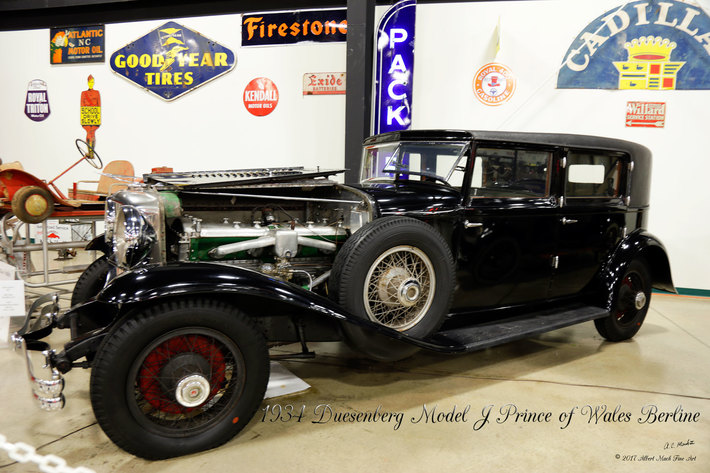 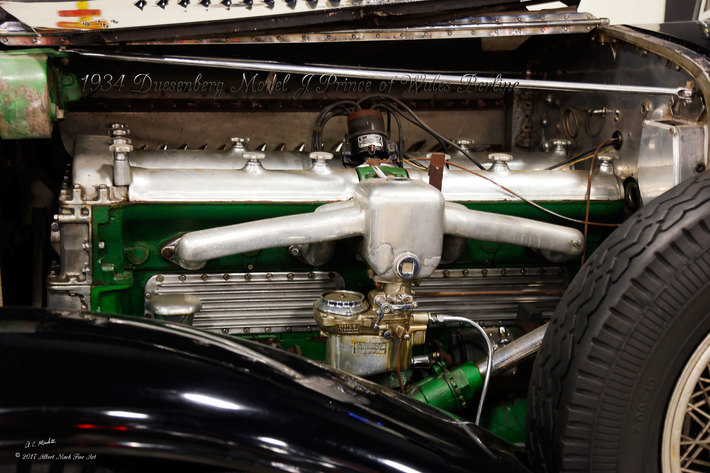 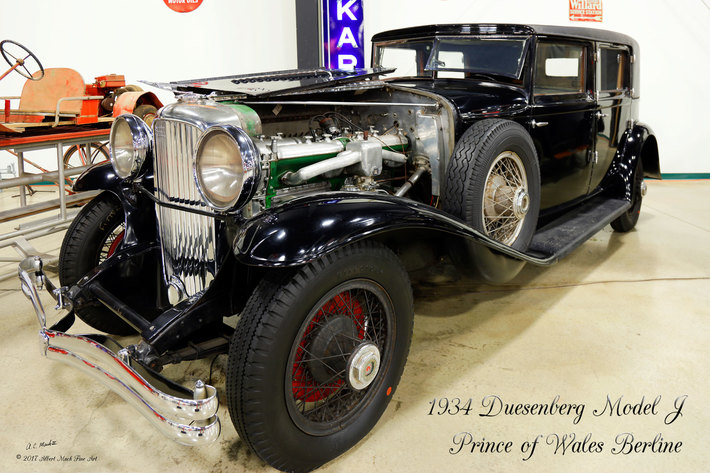 Few names in motoring are as redolent of wealth and power as Duesenberg. The ground-breaking company advertising placed in up-market periodicals for the Model J was one of the first campaigns that deliberately did not show the product. A series of soft charcoal drawings portrayed a man in evening dress, seated in front of the fire in a great hall with a minstrels' gallery dominated by a huge pipe organ, or the silver-haired skipper of an America's Cup-type yacht, above a single line of script: "He drives a Duesenberg". Women drivers were not forgotten: under the portrait of an elegant lady giving directions to her head gardener, "She drives a Duesenberg" said it all, eloquently underscoring a scene where one could perceive an additional four gardeners in the distance, tending the immaculate grounds.

America took the new model to its heart and a new superlative was added to the language: to this day the phrase "It's a Doozy" is a universal term of ultimate approval, just as the Model J has become the ultimate collectors' automobile. Duesenberg unveiled its Model J – the embodiment of company owner E.L. Cord and chief engineer Fred Duesenberg's vision of "The World's Finest Motor Car" – at the New York Auto Salon in December 1928.

Among its remarkable features was a twin-cam race-bred engine – a purpose-built 32-valve Lycoming 420ci straight-eight said to develop 265 bhp. With light bodywork, such as a Murphy roadster, it was possible to achieve 90 mph in second gear with a maximum speed in the region of 110 mph in high gear. Ride and handling were exceptional for the period, matched by 15 inch hydraulic brakes all around. Every chassis built was tested for 500 miles on the Indianapolis Motor Speedway before being handed over to a leading coachbuilder for the construction of custom bodywork.

Though they were built during the Great Depression and cost more than a Rolls-Royce or a Hispano-Suiza, the Model J Duesenberg had no problems attracting customers in the beginning. Among the rich and famous who drove Duesenbergs were film stars Greta Garbo, Al Jolson, Gary Cooper, Clark Gable and Dolores del Rio, whose husband Cedric Gibbons, famed film art director and creator of the "Oscar" statuette, was also a keen Duesenberg owner. Millionaires like William Randolph Hearst, Phillip K. Wrigley and Howard Hughes, as well as royalty like King Alfonso XIII of Spain, Queen Marie of Yugoslavia, King Vittorio Emmanuel III of Italy and Prince Nicholas of Romania were all members of the exclusive Duesenberg set: in the end, fewer than 500 Model J's were built.

The berline produced by famed New York coachbuilder Rollston on the elite Duesenberg Model J chassis was featured in Duesenberg's catalogues for 1931 and 1933, priced at a remarkable $16,000 in the latter year. Over the years several variations on the design were produced, including a pair of Ladies Berlines with storage for cosmetics and accoutrements in the rear compartment, one of which was reportedly delivered to Elizabeth Arden.

Another, one-off berline variation was the car shown here, the Prince of Wales, constructed on chassis number 2575 for a customer in Los Angeles whose name has been lost; according to notes in the file from the ACD Automobile Museum, it may have been air mail pioneer and serial Duesenberg customer, Walter Varney.

Fortunately, factory photographs of the car survive, showing it as it appeared when first delivered. Interestingly, like several very late Rollston Model Js, the car adopted features of the future "JN" series, most prominently the body mounted low over the chassis, hiding the frame aprons; there were no tool boxes or battery storage behind the running board, as on a conventional, early Model J. In addition, it featured a rakish vee'd windshield, which could be opened for ventilation. The result was a large sedan that appeared unusually low and sporting for its era. Its rear compartment was lavishly appointed, with a set of instruments for the passengers, as well as a vanity/cocktail cabinet and an intercom, all housed in the division.

Dr. P.W. Sherwood of New Orleans acquired the Prince of Wales Berline in Los Angeles in 1950, and it returned to the Big Easy with him. It passed through two other local owners, Francis Russo and Don W. Bagwell, before being acquired in 1957 by early Duesenberg connoisseur and enthusiast, Allen Thurn of Bethlehem, Pennsylvania. Mr. Thurn kept the Duesenberg until 1965, after which it passed through two short-term caretakers before joining the renowned Duesenberg stable of Homer Fitterling in South Bend, Indiana.

A gentleman farmer, Mr. Fitterling built the country's first well-known collection of Duesenberg automobiles, including such renowned cars as the George Whittell aluminum-top coupe, and maintained them for many years. While some of his automobiles were displayed in the ACD Automobile Museum and featured in magazines, the Rollston Prince of Wales Berline was a quieter denizen, although it did undergo some restoration work in his ownership.

In 1991, Mr. Fitterling was persuaded to sell his entire Duesenberg fleet to Ed Weaver of Dalton, Georgia, the flamboyant carpet manufacturer who then possessed one of the world's largest car collections. Mr. Weaver passed away suddenly shortly thereafter, and in 1996 his entire collection was sold. It was then that the Prince of Wales Berline was acquired for the Tupelo Automobile Museum, and it has been on exhibit as one of the museum's centerpieces ever since.

Today offered for the first time in nearly a quarter-century, the Prince of Wales Berline retains its original chassis, firewall, engine, and coachwork, less only the front fenders, which are presently those from a Henney hearse. Some of the exterior trim, such as the running board trim strips and the original luggage rack, are missing, and the headlamps are incorrect later sealed-beam units. The drivetrain is largely complete, as is the interior, although there are some missing components to both, and some of the woodwork appears to have been dismantled; further, some of the gauges are incorrect. Overall the car is an excellent basis for extensive freshening and tour use, or an ideal beginning for a complete, concours-quality restoration, at the end of which it will be most certainly one of the finest and most beautiful Duesenberg sedans extant.

Among Classic Era coachbuilders, Rollston stands virtually without peer in the quality and fine detail of their work – making this exceptionally elegant sedan, the one-off Prince of Wales Berline, truly worthy of the Mighty Duesenberg chassis.