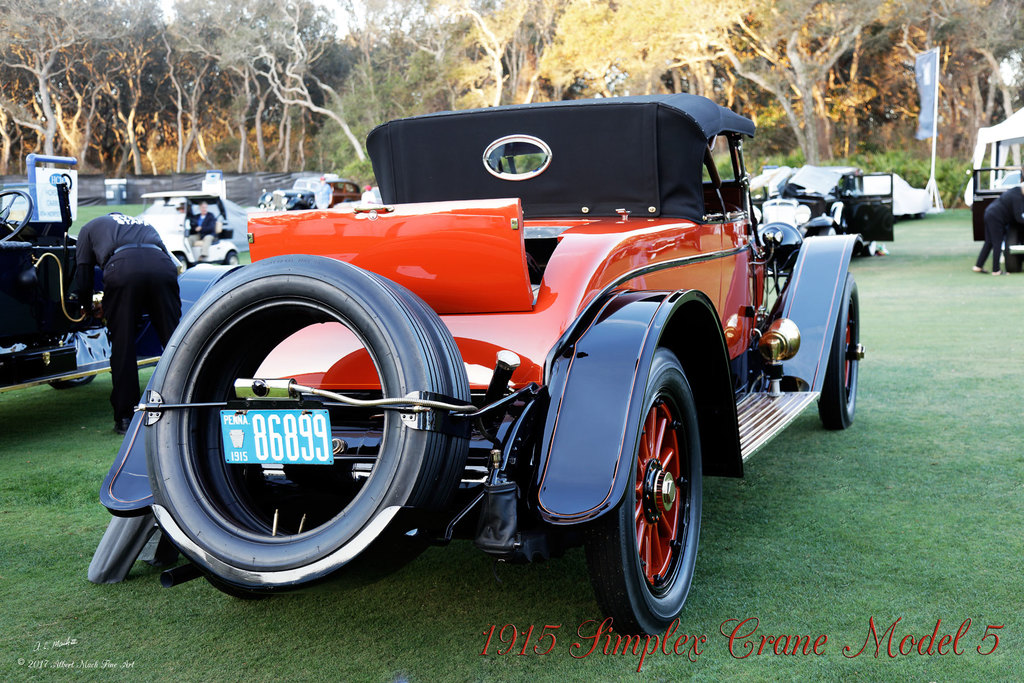 Striking and bold lines for an automobile built 1915, the Simplex Crane Model 5 was one of the most expensive cars available at the time. With the chassis costing $5,000 fitting custom coachwork would have run another $3,500-$5,000. There was a standard turnkey touring car body that was available for $1,500 but for the clientele of a Simplex - price wasn't an issue. Needless to say, production was quite limited. This Brewster bodied Simplex was built for Philadelphia department store tycoon John Wanamaker. He ordered it to be painted in Princeton University's colors, orange and black, as his son was a graduate of the University. The Simplex Crane Model 5 owes its incredible 110 horsepower (563 CID) L-head powerplant to Henry Crane, whose luxury automobile company was purchased by Simplex in 1914. While the car was built in 1915, records indicate the Crane Model 5 was capable of 80 mph. Stopping at this speed would be an issue as there are no front brakes. Pedal operation is through the driveshaft while the rear brakes are operated using a hand lever.

The 1st owner was John Wanamaker, founder of the first department store. The 2nd owner was James Bragg, President of the U.S. Steel Company.
By Daniel Vaughan | Mar 2017

In 1904 Smith & Mabley Manufacturing Company of New York City built their first car. To date, this remains one of the few companies to produce vehicles in New York City. The vehicles they produced were called the S&M Simplex. Noted for their quality, the company was positioned to perform well in the new and evolving automotive industry. Production continued until the company went bankrupt in 1906 partly because of a mounting recession. The following year, the assets were absorbed into the Simplex Automobile Company and purchased by Herman Broesel. Broesel was a wealthy textile manufacturer who was responsible for inspiring some large and fast Simplex models, such as the 50 and 90. Broesel died in 1912 which meant the company was now in the hands of his sons. The following year sales slumped and the brothers decided to abandon the company. Simplex was purchased by Goodrich, Lockhart and Smith who moved the company to New Brunswick, New Jersey. A year later they acquired Crane, resulting in the Crane-Simplex. Later, the company was purchased by Mercer Automobile Company.

The merger between Crane and Simplex was suitable; both produced high priced and high quality automobiles. Their vehicles were built to order. The Crane Company had been founded by Middleton Crane and had built a reputation for creating some of the nicest, most expensive automobiles in all of America. No expense was spared on the creation of their automobiles. The chassis, engine, and assembly was very detailed and every effort was made to create quality and insure durability.

Thus, the Crane-Simplexes were built in very low numbers. Their clientele included the wealthy and powerful, including the Rockefeller family.

The Crane Motor Car Company was purchased by the Simplex Automobile Company in 1914. Part of the acquisition included the services of its founder and chief engineer, Henry Crane. Up to this point in history, the Crane Motor Company produced vehicles in limited quantities; after the merger, production increased.

Henry M. Crane graduated from M.I.T. with degrees in mechanical and electrical engineering. His first employer was the American Bell Telephone Company, followed by Western Electric. He began the Crane and Whitman Company of Bayonne, New Jersey in 1906 which became the Crane Motor Car Company around 1910.

The first model produced by Crane was the Model 3 which made its debut in 1912. The rolling chassis cost a staggering $8,000 with custom coachwork costing additional. Between the years of 1912 through 1914, around 40 example of the Crane were produced. These cars would become the basis for the Simplex Crane when the merger occurred in 1914.

The Model 50 chain-drive Simplex had impressive power, speed, and endurance. It was an attractive car that lacked some of the refinements the American luxury-car buyer had grown to expect in the pre-WWI era.

The Simplex models prior to the merger had been powered by a four-cylinder, T-head unit. After the merger, the newly introduced Model 50 was fitted with a six-cylinder Crane-designed unit that offered 110 horsepower from the 564 cubic-inch unit. In similar design to the Rolls-Royce Silver Ghosts, the engine was built in two blocks of three cylinders each. With side valves the engine operated very quietly from idle upwards. The engines were so well built and engineered, they were produced without change during their production span. A new shaft drive setup replaced the old chain drive mechanisms. The wheelbase of the Model 5 Crane measured 144-inches.

In February of 1920, Simplex became part of the Hare's Motors, which included Mercer and Locombile. This dream-team lasted for only a short time, until 1922, when ownership passed to Henry Crane. He had hopes of reviving the marque but it would never come to fruition.

Henry Crane became a consulting engineer to GM Chairman Alfred P. Sloan. Crane later became famous in the boating field for his engines that powered the Dixie speedboats, which won the Harmsworth Trophy four times.
By Daniel Vaughan | May 2008

The above information came from:

This year’s Amelia Island Concours d'Elegance was wonderful, full of amazing vehicles.
You have to come and see it to believe it next year in 2018!
Don’t miss one of the most fabulous events of the year held on the second weekend in March.
Link to information here:
https://www.ameliaconcours.org/event-information.aspx