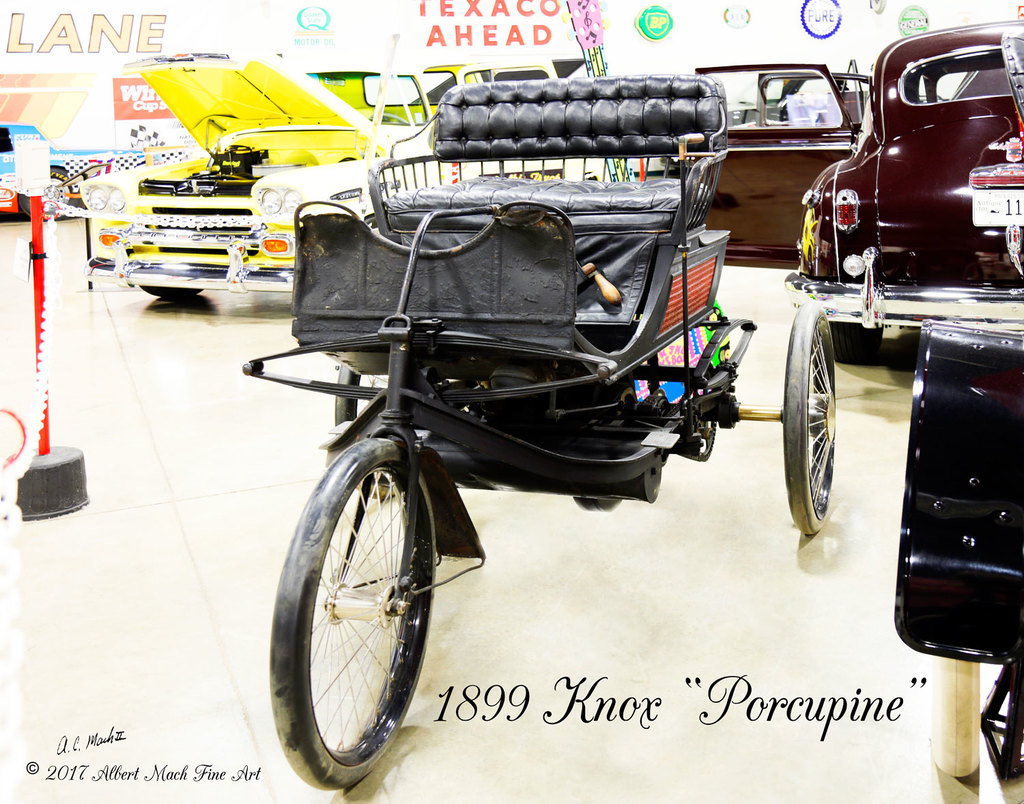 This auto was seen at The Tupelo Auto Museum

The following historical information came from:

The Knox was the brainchild of Harry A. Knox, a graduate of the Springfield Industrial School, located in Springfield, Massachusetts, one of the nation's first trade schools. Knox earned his practical education at the neighboring Elektron Company, a maker of electrical equipment. He was still a student in 1897 when he designed his first gasoline engine, a four-cylinder, air-cooled unit, and began developing a car with the financial backing of A.H. Overman, a bicycle manufacturer located in nearby Chicopee Falls. When Overman's interest in gasoline-powered automobiles cooled, Elihu H. Cutler, Knox's former boss at Elektron, tossed the young inventor a financial lifeline, helping him launch the Knox Automobile Company in 1899.

Knox built 15 three-wheelers in 1900, increasing production to 100 in the following year, when the company produced its first commercial truck. For 1902, the company added a four-wheeler to its catalog, and was rewarded with sales of 250 vehicles. Early on, Harry Knox recognized that success in competition would translate into increased sales, and entered his cars in hill climbs and reliability runs. The 1902 Boston-to-New York reliability contest was a great success for Knox, which captured two of the four cups. Sales continued to rise after the elimination of the three-wheelers in 1903, leading the company to issue dire warnings in its advertisements titled "The Rush for 1904 Knox Cars." "Nearly our whole output for 1903 was sold between January 1 and February 15, and many who neglected to place their orders before January 1 lost their chance," the ad intoned. "We are already shipping 1904 machines. All who have seen and tried them are convinced that they are far in advance of anything produced heretofore and the rush to place orders has begun so early as to indicate that by the time of the New York show our output for practically every desirable delivery date will be taken."

Knox's ride came to an end in 1915, when the company was declared bankrupt. Harry Knox was long gone by that point, forced out by his erstwhile benefactor, Elihu Cutler; he went on to found the Knox Motor Truck Company, later renamed the Atlas Motor Truck Company, and was designing tanks and track-laying equipment for the U.S. government as late as 1945. His old company became more mainstream, switching over to water-cooling in 1908, and ending its run with a line of large, luxurious 6-cylinder cars. It would be decades before millions of Americans would put an air-cooled car in their driveway, and when they did, it would be from Germany.

You can forgive the early engine designers if they seemed a trifle preoccupied with cooling. Overheating was a significant problem that could lead to an engine's destruction; water-cooling was the solution most often used, but was not without its faults. Knox's answer, air-cooling, was certainly simpler in practice, but its design required a grasp of metallurgy and thermodynamics that was unusually sophisticated for its time. What Knox did was to screw 1,750 threaded rods, 3/16-inch in diameter, into the single horizontal cylinder in place of the more conventional cooling fins. One look at this enormous bottle brush of a cylinder, and you understand why the car became known as "Old Porcupine." "The Knox Patent Air Cooling is superior to any air cooling system extant," the advertisements boasted. "The corrugated pins surrounding the cylinder radiate the heat and make it possible to obtain 32 square inches of heat radiating surface per square inch of outside surface of cylinders."